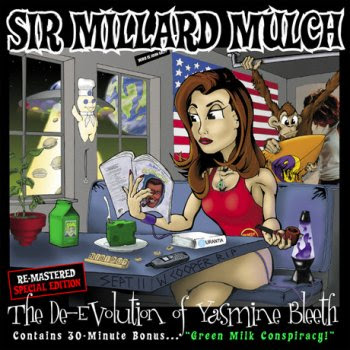 The very same Carl King is also the man behind projects like Sir Millard Mulch, or Dr. Zoltan Obelisk.
The above picture is the album cover for Sir Millard Mulch's "The De-Evolution Of Yasmine Bleeth".
It got released some ten years ago and it's great.
It hops between genres and it's more a play than it's a music album.
Did someone say 'Weird' or 'Bizarre' ?
Anyway, I love it.

Here's a little sample (with Morgan on the drums)