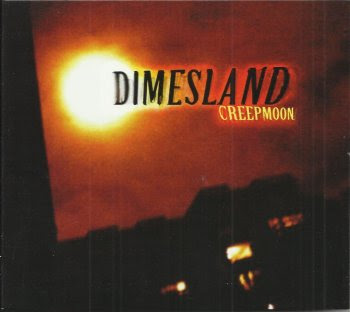 The reason for me to check out Dimesland (or to Land Of Thin Dimes as the band was originally called) came from Nolan Cook. Nolan plays the guitar for The Residents. On record and on tour.
During the last years, Nolan Cook's guitar playing has added a very recognisable, typical sound on The Residents' recordings. Clean, long, floating notes. A sound that fits The Residents perfectly.

His work on Dimesland is quite different. Dimesland is a metal band. The guitar is a lot heavier and more energetic. Not something that I would consume on an empty stomach.

"Creepmoon" is a 15-minute mini album that got released in 2012, a couple of years before their latest "Psychogenic Atrophy".

Here's one of their more recent songs. It will give you a pretty good idea of what Dimesland is about.