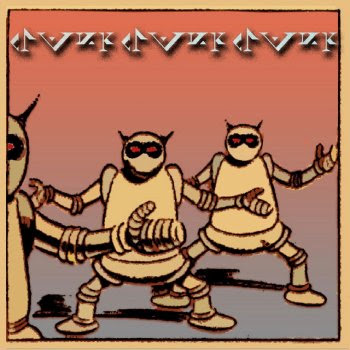 Klanggalerie is combining new releases, re-issues and special items when it comes to Charles Bobuck and to The Residents.

"Clank Clank Clank" is the 4th installment in the TOOK series.
This time, Charles Bobuck presents his demos for a redo of the first ever Residents album, "Meet the Residents".
Recorded in 2014, the project was shelved, but Klanggalerie has now put them on CD.

This is what Hardy Fox says about the recordings: "In the midst of writing music for The Ghost of Hope back in 2014, Charles Bobuck had what he thought was a musical epiphany, The Residents were very focused on their 40th Anniversary and he felt that a special 40th anniversary album should be released. The train wreck album seemed fine but very removed from the anniversary celebration. So he proposed an album about the Meet The Residents LP from 1974. It would be new material but include versions of the songs from Meet the Residents cobbled out of samples taken directly from the original recordings. It would be autobiographical. It would include stories and memories from making the recording forty years earlier. The idea was received with little interest. In response, he decided to record some demos to show what the new arrangements could sound like. Still, the idea did not catch on, and neither did The Ghost of Hope which was shelved due to the touring schedule, so Bobuck started working on What Was Left of Grandpa and the demos were filed away. Three years later, 2017, Hardy Fox and Walter Robotka were figuring out the Hacienda Bridge newsletter schedule and subjects. They wanted to do an issue on robots, AI, computer music - that kind of thing. Walter asked Charles Bobuck if he had any music that would fit into that theme for a CD to go with the issue. He remembered that he had the demo redo’s of Meet the Residents that used a lot of hi-tech computer driven splicing and syncing. Hardy and Walter agreed the demos should be released. After a bit of reworking, they were fashioned into an EP CD called Clank, Clank, Clank. It is the sound that robots make when they dance."

Personally, I love the idea of redoing or rethinking an album from 40 years ago. Especially whent it's done by the same artist. And this little album sounds great !

"Clank Clank Clank" got released in a very limited edition of 300 copies. It sold out a couple of days after it became available.