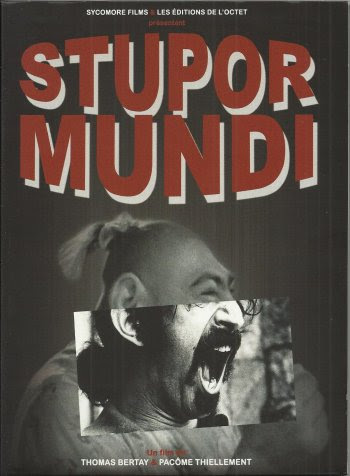 Sycomor adds:
The movie was born of our meeting with the producer Xavier Filliol, great connoisseur of the Freaks and friend of Carl Franzoni. Xavier Filliol introduced us to Gail Zappa in Los Angeles, who was very enthousiast in watching our movies. She gave us her consent and support to use musical materials from her husband. The crowdfunding campaign of December 2013 had to cover the investments in new shootings and post production costs.The minimum amount required was 35 euros. As a counterpart of this support, contributors received a box of 4 DVDs with 52 episodes of the serie The Apparatus. If contributors gave 50 euros or more, they'd also get the DVD of Ritual of Pope Decapitation. With this campaign, with your support (over 500 contributors), we reached the amount of 32,000 euros.

One year after, following shootings and a long editing time, we realized that we won’t « put our elephant in a shoe box ». So, it’s not one but 4 movies that we decided to release, gathered under the title STUPOR MUNDI. The topic is not only Zappa and the Freaks but « A History of EVERYTHING (and its monsters) ». And since last April, the two first episodes have been screened at several festivals.

To be quite  honest, I had forgotten all about this documentary and its crowd funding campaign. I did remember receiveing the box set with "The Apparatus" episodes in 2014, but the package with "Stupor Mundi" that arrived last week came as a surprise.
The box can hold 2 DVDs, but only 1 DVD was included. This disc presents the first two movies : "Ritual Of Pope Decapitation" (a reference to pope of LSD Timothy Leary, who has his head stored in a fridge somewhere), and "Men Who Devoured The Mountain" (being the yuppies who took over Hollywood and the music industry and everything else).
A film by Thomas Bertay and PacômeThiellement. Music by Frank Zappa.

Not the easiest stuff to watch but very impressive.
Includes interviews with Frank Zappa, Gail Zappa, Carl Franzoni (one of the early L.A. freaks) and Trey Spruance (of Secret Chiefs 3), plus some concert fragments of Zappa's band.

Great package with a superb cover mixing a shot of the "Freaks" movie with FZ's yawning face from "Chunga's".
Can't wait to see the sequel.

Those who missed the original crowdfunding, can still order this documentary.
Check out : http://stupormundi.tv/ for all the details.