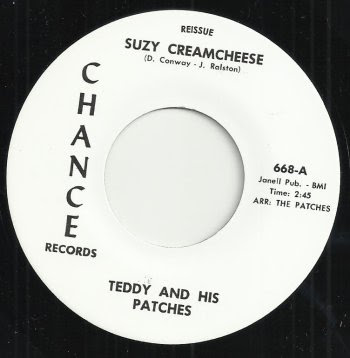 Somewhere in 1967, Teddy & His Patches released a 7" with 'Suzy Creamcheese' on the A-side.

No coverversion of a Zappa tune, but an original composition that uses some FZ lines.

wikipedia
... Recording sessions generated two tracks, including "Suzy Creamcheese", a bizarre tune written by Conway and promoter Jerry Ralston.[5] The song was inspired by the opening dialogue—which "Suzy Creamcheese" features Flores mysteriously reciting—taken from the Frank Zappa composition "The Return of the Son of Monster Magnet".

Well, this very rare 7" has recently been reissued. If you take a closer look at the above picture, you can see that it says "reissue" on top.
An illegal reissue? Yes, but with the original going for more than US $ 100, and this reissue being available for about US $ 10.00, it's not that bad a deal.