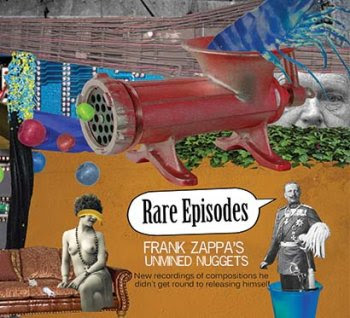 There is a new Cordelia Records CD - as usual available from the record shop page at www.cordeliarecords.co.uk and CD Baby in the fullness of time.
This is another Frank Zappa related one that was organised in conjunction with the people at http://www.idiotbastard.com/ - it's a collection of new recordings of unreleased Zappa compositions.

"Rare Episodes"
Frank Zappa's unmined nuggets
New recordings of compositions he didn't get round to recording himself.

A CD conceived by Andrew Greenaway of The Idiot Bastard website and author of "Zappa the Hard Way" (the definitive account of Frank's last tour). The idea was that some of the world's foremost Zappa-influenced bands would record thirteen Zappa compositions that he either didn't record, didn't release or, if he did, he changed them quite a lot first.

These are the tracks:

One of a number of pieces Frank wrote "must record" - see The MOFO Project/Object booklet - and then actually did: at TTG Studios in Hollywood on 10 June 1966, during sessions for the Burt Ward single Boy Wonder I Love You.

2.  FALLING IN LOVE IS A STUPID HABIT by The Vegetarians

A song Frank denied knowing, yet a tape exists of him demonstrating it to drummer Jimmy Carl Black. Jimmy told The Idiot Bastard that Frank said he "could have the song and we even discussed the instruments that would sound good on it. It was Frank playing the piano in his studio with Andy Cahan and me there. The year was 1981 and I was in California rehearsing for the first Grandmothers tour of Europe."

An instrumental originally recorded during the Hot Rats sessions in 1969, and intended to be released as the b-side of a single version of 'Sharleena' that never happened.

According to Frank, the first thing he ever composed: "a piece for snare drum...I wrote that when I was about 14 and performed it at school."

Performed live during the 1975 Bongo Fury tour, and rehearsed by the 1981 band, but like all of these songs, not officially released thus far.

An early version of 'Mo 'N Herb's Vacation' in a basic arrangement, described by drummer Terry Bozzio as "like 'The Black Page', but more of it!" Performed live with Vinnie Colaiuta and Arthur Barrow in 1978, Chad Wackerman told The Idiot Bastard he also "did a studio recording for Frank."
8.  CLOWNS ON VELVET by Lex Bronkowitz Orchestra

First performed at New York's Ritz Theatre in November 1981, with special guest Al DiMeola on lead guitar. Frank then added studio overdubs to a fragment of this live recording and had the Thing-Fish rap over it.

An instrumental similar to 'Approximate', only ever performed live by the Petit Wazoo in 1972.

Officially released in instrumental form only on the albums Imaginary Diseases, Apostrophe, QuAUDIOPHILIAc and You Can't Do That On Stage Anymore Vol. 1. In 1972, the piece has the lyrics presented here. (This version also appends the rare 'Village Of The Sun' intro/outro that appeared on the recent Road Tapes, Venue #2 release.)

11. BRUTALITY by Neither Beasts, Nor Gods

A Synclavier composition from a cassette titled Resolver + Brutality that Frank handed to someone he'd had an 'intensive artistic relationship' with for several years.

Another piece performed live during the 1975 Bongo Fury tour, providing Frank with an opportunity to tell various tales about life on the road.

13. WE ARE NOT ALONE by ZAPPATiKA

The instrumental track on The Man From Utopia album had these lyrics when rehearsed by the 1981 band.

Other Zappa related CDs available from Cordelia are "Lemme Take You To The Beach" (The Surf instrumental bands of the word perform the tunes of Frank Zappa) - and three previous collaborations with the Idiot Bastard web site: "20 Extraordinary Renditions" (of the song "The Idiot Bastard Son"), "21 Burnt Weeny Sandwiches" (21 condensed versions of the Burnt Weeny Sandwich album) and "On Broadway: Covers Of Invention" (Zappaesque versions of other people's songs covered by Zappa on the '88 tour).