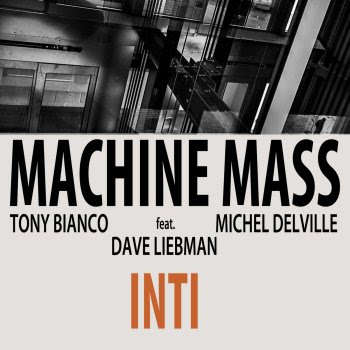 Machine Mass, or the Machine Mass Trio, has a new album out.
In the liner notes, John Kelman explains that Machine Mass was originally created as a duo with Michel Delville on guitar and Tony Bianco on drums and percussion. While recording, the both of them felt that adding a third musician would be a plus. The first album, "As Real As Thinking", featured Jordi Grognard on sax. It got released in 2011.
For "Inti", the duo approached Dave Liebman. Saxophone legend Dave Liebman has recorded and performed with John McLaughlin and with Miles Davis to name just two.

The result is very impressive. This is modern jazz. Beautiful modern jazz.
Comples rhythms and loops, tight playing and fabulous improvisiations.
The unexpected extra is a superb version of Joe Zawinul's 'In A Silent Way', with Dave Liebman on flute, Michel Delville on guitar and sitar loops and Tony Bianco on layers of percussion.

My favourite track is 'A Sight', a Michel Delville composition that not only shows his musicial influences (Zappa, prog rock and jazz) but also displays his recognizable guitar sound.

Out on Moonjune Records.
http://www.moonjune.com/