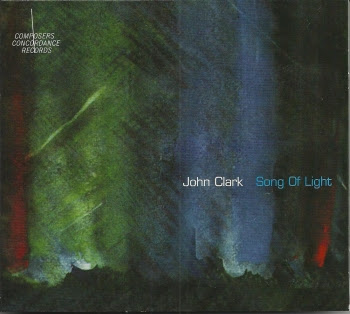 Composer and french horn player John Clark released his first album as a band leader in 1980 : "Song Of Light". It must have been quite a revelation as he probably was one of the first to use the french horn in a classic jazz setting: french horn, piano, bass and drums.

John Clark self-produced the record stating that he could make all the mistakes himself, instead of having someone else make them, which is quite an understatement as "Song Of Light" is a beautiful album. I love the compositions, and the playing and the improvisations are superb. It's great to hear a french horn outside the classical environment.

"Song Of Light" presents seven compositions and each and every one of them is great.

The title song is an  uptempo track that sounds like it has three french horn players (love those overdubs !);
'Introduction' walks the funky road and has some nice key-changes;
'The Answer / Island Flower' is a slower piece. It has spun-out melody lines. Soundscape soundtrack;
'Trevor's Dance' and 'Glimpse Of Freedom Part 2' take us back to the jazz corner. Great and catchy tunes, showing the talents of the quartet.
'Belle's Ballad' just might be my favorite piece on "Song Of Light". A beautiful ballad.
The album ends with 'Sandy', another fine composition, with some great soloing by Michael Cochrane on piano and by Ron McClure on bass.

The Composers Concordance label recently re-released "Song Of Light" on CD. The album got remixed and got a new cover.
It's a gem.
If you're into groovy jazz, you should definitely check out "Song Of Light".
http://hmmusic.com/drupal/home