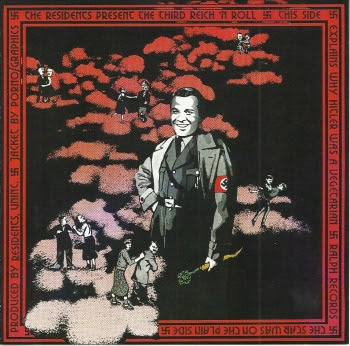 "The Third Reich 'N Roll" was The Residents' second release. It got released in 1976. Actually, it was to be their third album, but the already recorded "Not Available" only came out in 1978.

With "The Third Reich 'N Roll" it became clear that The Residents' World would not be limited to releasing music. The album cover shows TV host Dick Clark in a nazi uniform, and the music is a parody / collage / reworking of music that The Residents grew up with.
A track list might look something like this:
side one - Swastikas on Parade
side two - Hitler Was A Vegetarian