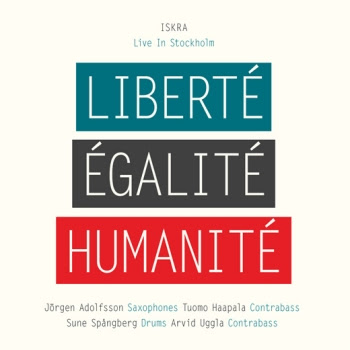 I talked about "The Vedbod Tapes" album a couple of days ago, saying that the album offers a collection of improvisations in which jazz, free jazz, western folk and eastern melodies and percussion are mixed into adventurous musical pieces. Recommended listening.

ISKRA goes one step further.
from the liner notes:

"From 1970 to 1992, ISKRA was Skandinavia's foremost group for free improvised music. They made finciful, unpredictable, uniquely personal music that transgressed all genre boundaries. ISKRA's music was built on the collective improvisation, and the arsenal of instruments used was limitless."

Named after the early 20th century Russian socialist newspaper, ISKRA wanted to translate their political ideas into music. They use three key-words to demonstrate this.
'Liberté' / Liberty stands for playing freely. ISKRA searches the music of the moment, created on the spot. 'Egalité' / Equality means that there is no conductor of bandleader present. ISKRA opposes hierarchical thinking. Anyone can come up with an iniative, with any instrument. 'Humanité' / Humanity shows that the ISKRA musicians want to connect to the ongoing struggle for equal rights for all humans around the world.
So when original ISKRA members Jörgen Adolfsson, Tuomo Haapala, Sune Spångberg and Arvid Uggla teamed up for a reunion in Stockholm in 2003, they played a spontaneous, completely improvised set.
"Liberté Egalité Humanité" brings us a recording of this concert.

This is not for the faint hearted. I've listened to the album a couple of times already, and it needs another couple of listenings. The music is completely free with very few interfaces or reference points. There is, however, a fine interaction between the musicians and you can tell that they have played together before.

"Liberté Egalité Humanité" needs multiple listenings, and it asks for you complete attention.

Here are two YouTube samples to give you an idea of what ISKRA is about: two animated movies with music by ISKRA.