I have had numerous questions about this one over the years. The main one being: 'Does it exist?'.
Appearantly, a belgian collector said that he had a copy for sale, but he never showed his copy to anyone. And that's how the rumour started.

Anyway, it does exist. And it did change hands a while ago.
The latest owner (who lives in the UK) offered his copy up for sale at ebay.
For a mere 600 UK Pounds.

It did not get sold, but we did get to see the pictures. 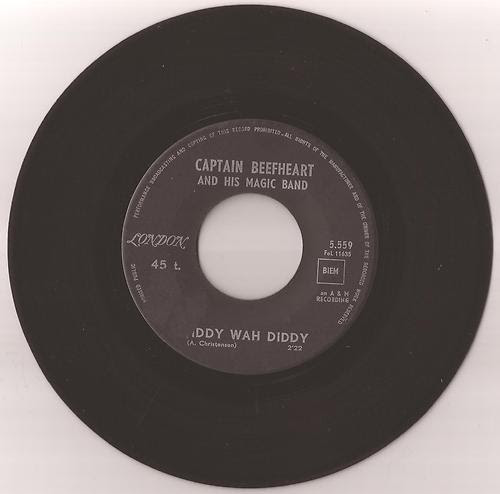 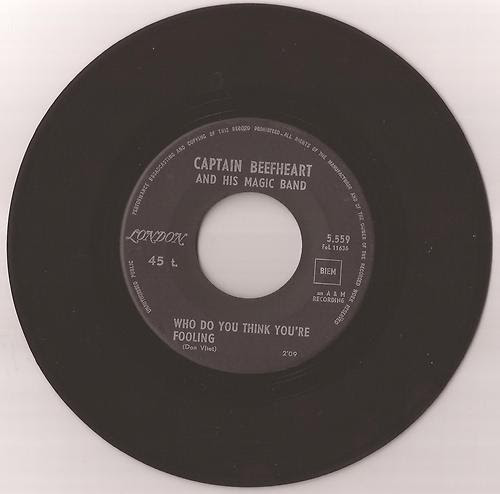 from the ebay listing

"I am selling this 'Ultra Rare" Belgian 7" Single which is extremely scarce. It took me '20 YEARS' to verify a copy actually existed - The Magic Band's debut 45 was released in the USA and Canada on A&M Records in Jan 1966 and had a very 'limited' pressing outside the USA. It was actually only released in *Feb '66 in Canada (on A&M also), plus a very limited pressing in Australia (on Festival Records) and this obscure European pressing on London Records 5 5559 - who were distributors for A&M at the time. [*The Date can be seemingly verfied as Roy Orbison had 2 Singles released in 1966 on London Records 5564 + 5.581 - The 1st being only 5 Numbers after Beefheart's!]

Why it didn't merit an original release here in the UK but was pressed in Australia + Belgium of all places, is just another strange story in History of The Magic Band? - Strange as there was a burgeoning R&B/Blues Scene in the UK - but with no promotion until John Peel championed The Magic Band in 1967 on his Pirate Radio Show, the single only had local success in their home town of Lancaster, California.


In 1971 - A&M decided to try again by releasing all 4 tracks from the two A&M Singles on a 7" P/Sleeve EP but this project was aborted with only a few advance/promotional pressed before it was withdrawn (due possibly to the band cancelling their much publicised UK appearance at the Hollywood Music Festival in Stafford that year..) making that demo highly collectable also.


Why was it released in Europe & not in the UK? Whatever reason, it has made it the 'rarest' stock Magic Band single without doubt! I was only made aware of it's existence by Bill Pircz & John Ellis (2 US Beefheatarians) almost 20 years ago when they both posted me details of this record and the Canadian pressing on their Beefheart 'wish' lists and I must have written to over 1000 European record collectors over the years until I uncovered a copy (and believe me I paid a lot of money for it!)"