For the last eleven years, the Bach organ support group has been scheduling concerts at the St.Katharinenkirche in Hamburg as 'opener concerts' for the Zappanale Festival.
The Hamburg concert always takes place on Wednesday and the Zappanale festival starts on Friday (not counting the warm-up party in Bad Doberan on Thursday).

Initially, the concerts were set up as a fundraiser to repair the organ (that J.S. Bach once used to play).
Now that the organ has been restored, it's sort of a support for the Bach organ group.
Hence the title: "Zappa Spielt Für Bach".

This year's show consisted of three parts : a Frank Zappa set (by all the musicians), a Thelonious Monk set (by the jazz trio and with Napoleon doing vocals on one piece), and after the break, Fried Dähn's compositions (Fried Dähn and Laurenz 'light show' Theinert).
The show ended with another couple of Zappa pieces as encores (by everyone but Napoleon)

Here's a picture that was taken during the encores. If you look closely, you can see the band in the below center. The rest of the picture shows the walls (and ceiling) of the church. 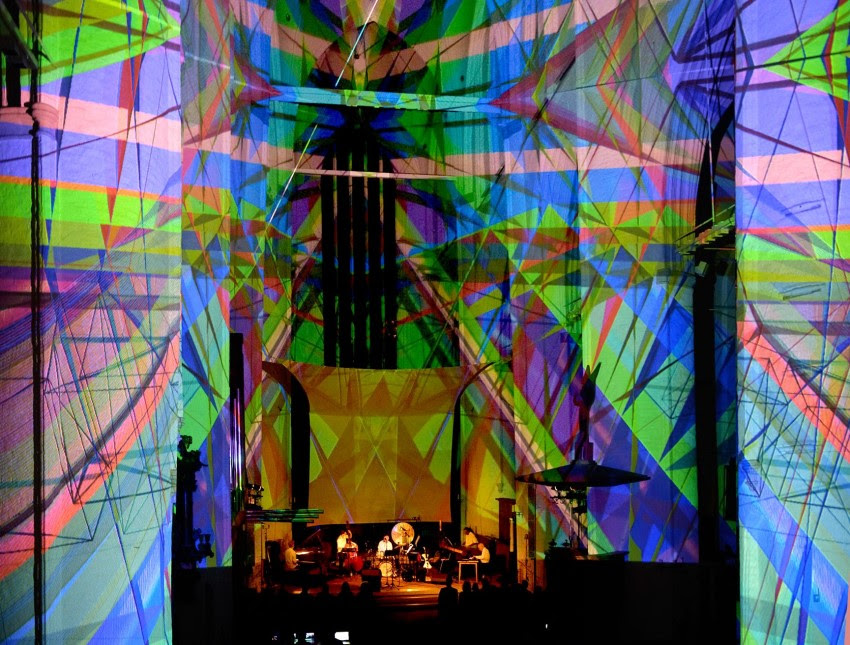 Friedemann Dähn
Frank Zappa
It was a very fine concert. It's never easy to make concerts sound good in a church, but this time, the sound guy did an excellent job.
The jazz trio made it swing; Napoleon was in fine shape; Fried Dähn gave me goosebumps with his oriental sounds and feedback on his electric cello (L.Shankar came to mind); and Chris Garcia showed why the marimba is such a beautiful sounding instrument.
Loved it.
The Zappa tunes were great.
The Monk pieces sounded fine, especially when Napi added the vocals.
And Fried's pieces (+ light show) were quite interesting.

That's what I call kicking off Zappanale..

The show got recorded by German national radio so we might get another CD release.

Here's some snippets from the latest ten years;