THE MOFÜGLYS - A MURDER OF CROWS 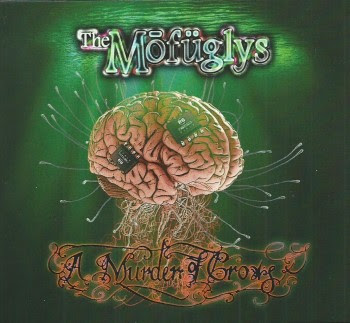 Steve Welsh and Chris Witner are the guys behind The Mofüglys. As far as I know, "A Murder Of Ravens" is their first album.
Among the guest musicians that participated on this impressive release one finds Ike Willis, Bryan Beller, Rick Musallam (who performed with Mike Keneally) and Eric Svalgard (who was part of Project/Object).
Yes, I used the word "impressive", because that's exactly what this album is. I picked up my copy at the merch table at the Zappanale festival last week and if my memory serves me right, I think I even recall seeing a couple of people walking around in a Mofüglys t-shirt.
The band's name didn't ring any bells, although once back home, my notes told me that I had mentioned them on this very blog in 2013 already. I guess it took some time to finish the album.
Anyway, at the merch table at Zappanale, it was the list of guests (mentioned on the back cover of the album) that convinced me to buy it. An excellent decision, even if I say so myself.

"A Murder Of Crows" is a beautiful, Frank Zappa-inspired progressive rock concept album.
Fine compositions, a strong message, and impressive contributions by the guest artists, wrapped in great artwork.