ZAPPANALE #30 - THE EXPO AND THE BOOK - THE ZAPPA ATLAS 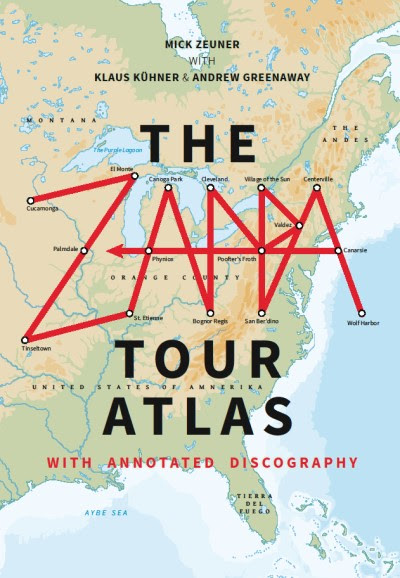 Reading about a book that will draw out all of the tours of Frank Zappa and even of The Mothers of Invention, is one thing.
Holding the actual tome in one's hands and browsing through it, is quite another.

The book totals some 250 pages. It has over 120 pages with maps and schemes that show where FZ played during his career. And with whom he played.
Actually, it starts with the places where Frank lived: Where he grew up and the different places he moved to after leaving his parent's house.
The second part of the book, another 100+ pages, takes a look at FZ's official discography. One album per page : album cover, release date, recording dates, track listing, and some comments. Very nice.
Hardback, bound and huge. Exactly how an atlas should be done.

The Zappa Tour Atlas also was the main theme for this year's Zappanale Expo. Enlarged maps, tour posters,...
I was quite impressed.
Respect -> Mick Zeuner, Klaus Kühner and Andrew Greenaway.