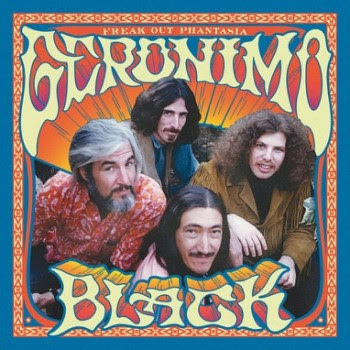 These previously unreleased live and studio sessions are a loose exercise in spontaneity, and sheer art, which has been lost in the mists of time. Geronimo Black, a truly underrated band from Los Angeles, had existed long before its self-titled debut album released officially by UNI Records in February 1972.

Composer, arranger, keyboard player, and founding member Andy Cahan, was also part of Dr John's band at the time. Despite the fact that nearly all his players were part of the busy schedule of the evolving Frank Zappa's band Mothers Of Invention, Cahan attests that, “it was a real band with every intention of getting a record deal. Of course, since Jimmy Carl Black, Ray Collins and Bunk Gardner were from Zappa's original band, that was a big selling point to record companies.”

Talking about the songs on “Freak Out Phantasia” release, which preceded the first official album, Andy mentions that The Beatles were his main influence. Also, he name checks other luminaries such as The Zombies, Kinks, Lovin' Spoonful, Hendrix, Cream, Dave Clark Five, and The Beau Brummels. The live output found on this release is part of their non-stop gigging system. It's worth pointing out that around that time, they were playing gigs with The Eagles, Delaney and Bonnie, The Byrds, Eric Burdon, Joe Cocker, Ike and Tina Turner, The Standells, Canned Heat, Southwind, Taj Mahal, Little Feat, and many others.

Some songs herein included were recorded in a prison. Even doing very well on their live adventures, in terms of breaking through in sales, Geronimo Black never had the same lucky destiny of many of their Californian contemporaries. Signing a record deal with Uni Records around Christmas time, they were essentially deemed a tax right-off and were billed thousands of dollars on no income.

Back to the present, some highlights of Munster Records' compilation include “Topanga Canyon People” and “Ooh Poo Pah Doo” (both live recordings showing their total intensity and stoned freak-out atmosphere, recalling Zappa's sound, which obviously they were part of). “Let Us Live” is a superb song, with a bluesy-pop-twisted Southern rock vibe. An alternate version of “Siesta” is another key song, and in some ways resembles “Flute Thing,” a classic instrumental by The Blues Project. Now it is time to enjoy these recordings because they “reveal the raw passion and excitement we had on stage,” as Andy concludes. Includes CD with four bonus tracks.