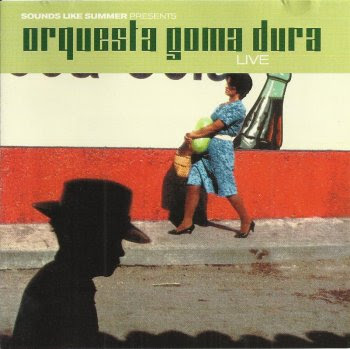 Sometimes I just can't hide my enthusiasm for big bands that play a mixture of rock and contemporary jazz.
The Canadian Hard Rubber Orchestra is such a band.
In 1999, the band (conducted, orchestrated and directed by John Korsrud) made a figurative journey to South America when they recorded an album as the Orquesta Goma Dura (Hard Rubber Orchestra).
Appropriately titled "Live", this little disc will most probably make you dance (or sort of nod your head in an approving manner).
Love it.

Here's a snippet from a 2013 concert by the Orquesta Goma Dura.
It will give you an idea of what the album sounds like.