THE VEGETARIANS - LET'S HAVE A GOOD TIME 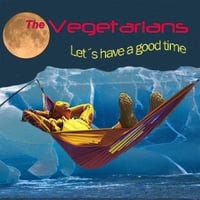 Hans Annéllson's project, The Vegetarians, has just released "Let's Have A Good Time".

Short but oh so sweet.

Four tracks. Hans plays most of the instruments, but there are some remarkable guests as well !!

You can listen to snippets over at CDBaby.
You can also order the (download-only) album at CDBaby:
http://www.cdbaby.com/cd/thevegetarians9