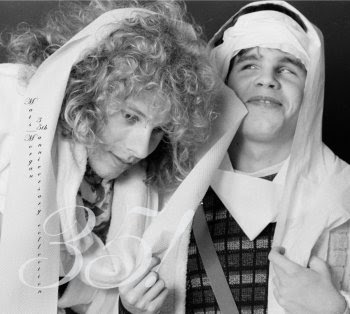 Mats and Morgan are celebrating their 35th anniversary with the release of a 2CD set.
The duo released their first album in 1996, a couple of years after their performance at Zappa's Universe. How time flies.
This bundle collects their favourite tracks.
Remastered.
And on Morgan's new record label.

Now that I think of it, I discovered Frank Zappa's music a bit over 35 years ago.
In the meantime, Mats and Morgan have been responsible for some of the best music that I have enjoyed in these 35 plus years of listening.

When I was 14 years old I received a telephone call from a lady that was organizing a concert in a little village outside Umeå, Sweden. She asked me if I could join this blind pianist named Mats Öberg. She knew about me and believed that I might be the right one for Mats. Same musical taste maybe, and same age. Mats had problems to find people in his own age with any interest whatsoever in playing the type of music that he liked. Mats was in fact listening to Miles Davis and Mahavishnu almost before he could walk, but at the same time music for children as well. I did have similar taste in music so I was very happy to get this request.

A few days later me and Mats met for the first time at the venue and started to discuss what songs we could possible do together. It had to be covers since we met only a few hours before showtime. Mats asked me ”do you know Beatles”?

- I guess I can play ”Help” without any rehearsal I replied. ”How about Frank Zappa"? - I can do 'Bobby Brown I think’.. ”Do you know Stevie Wonder”? Hm, do you know the first track on side two of ”Hotter Than July?”, yes, Master Blaster, ok lets do that one! We now had three songs which was enough for the 20 minutes that we were supposed to play. As soon as we started to play I simultaneously watched Mats in complete disbelief. He was only ten years old but played unbelievable and sang with the lyrics in good pronunciation (except for the dirty words in Bobby Brown that his mother wanted him to leave out!) After we finished I noticed that my dad was almost in tears and Mats daddy was very excited too and started to propose things to me 'maybe you should...you could... I mean... meet and play together some more, we have a drum set in our basement..’ This was in 1981, and now 35 years later I realize that we have been exploring music together more or less on a weekly/monthly basis all since then.

One thing that I particularly remember from the first years was the record collection in Mats parents basement. I used to scroll through these vinyls, grab one and ask ”Mothers Of Invention - are they good”? Yes! ”Gino Vannelli, is he good”? Yes! Can I borrow these? Yes! All this music opened up a new beatiful world and a spiritual state where I wanted to be. I also ran into Allan Holdsworth, Steely Dan and Return To Forever etc. which I was able to introduce for Mats as well. It was such an exciting time finding yourself through all this music. It happened so early for both of us too. There is many funny stories from Mats childhood that shows his passion for music, like that time when he forced his parents to buy the latest Earth Wind and Fire album, otherwise he would jump down the stairs....Or like when he was visiting his uncle Berndt Egerbladh and got to try his grand piano. Mats could not stop play this piano but after a while his father and uncle really had to make him to quit. Mats then replied ”if you force me to stop now I will pee my pants” - and so he did! - His father then replied ”Stevie Wonder would never do a thing like that”. I had a special moment in my youth as well while I had to defend my playing. My parents had some friends and their kids over for a dinner, so I played my toy drums for them. But they kept saying that what I did wasn’t especially good, so I tried harder but they kept saying ”not so good”. I then grabbed my cymbal and trowed it in the face of one of the guys who crashed down to the ground with blood coming our from his face. I got so scared so I thought I would die, but all came out good in the end (and we are still friends!) I actually told Mats about this incident early on which made him laugh a lot, but he got a bit worried for a moment also, saying ”but you don’t do these things nowadays, do you"? No. No I don’t. So all is good! Playing this music doesn’t make you rich though. But 35 years, including touring all over the world, releasing albums, meeting great people, playing with many of our teenage idols, receiving grammys on both sides of the Atlantic, seeing amazing places etc. This is something you can’t buy for money.
Thank you all!!
Morgan Ågren 27/8, 2016.