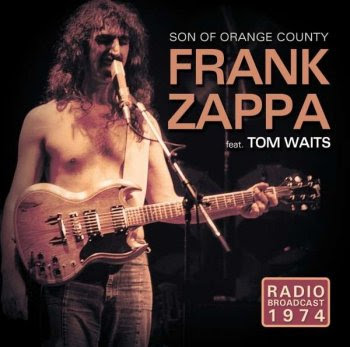 Here's another one of those semi-official releases : "Son Of Orange County".
The album cover says "Radio Broadcast". Unfortunately, it doesn't really sound like that. Quite the opposite actually.
What's even worse is that there is a pauze of a couple of seconds between every two tracks. Very annoying.
The cover also says "Tom Waits" which is a bit misleading as the recording is from the early show that Zappa did in Boston on 1974/11/09. Tom Waits appeared as a special guest during the late show... There's no Tom Waits here.
Can it get worse?
Well, the back cover of the CD lists 10 tracks, while the CD has 12 tracks. They forgot to mention 'Dog Breath' and 'Building A Girl'.

And the same back cover also says "complete show" and that's not true either as 90 minute recordings of this concert exist and there's only some 80 minutes on this CD.

So if you want to spend 10 euro, be aware that you're doing it for the album cover only.
If you want to hear a complete (and better sounding) recording, check out the Zappateers website.