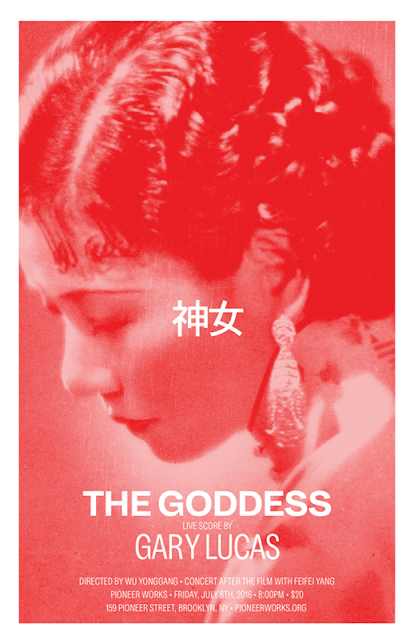 Gary Lucas "The Goddess"
Known for his experimental and constantly shifting sound grounded in American folk-blues, Gary Lucas is back at Pioneer Works performing another original live score, this time accompanying the 1934 Chinese silent film “The Goddess”. Directed by Wu Yonggang and starring the incomparable Shanghai diva Ruan Lingyu, ‘The Goddess’ epitomizes the tragic tales common in the films from the ‘golden age’ of Chinese cinema. Lucas’ live score draws on his bluesy arrangements of 30’s Shanghai pop of the period as featured on his celebrated 2001 album “The Edge of Heaven: Gary Lucas Plays Mid-Century Chinese Pop”(Knitting Factory Records).

After the film, Gary will be joined by renowned Chinese vocalist Feifei Yang to perform renditions of classic Chinese Pop songs from the era.

Feifei Yang is a celebrated Huqin (Erhu and Banhu) artist and an award-winning singer. She is a member of Chinese Musicians’ Association, Chinese Music Ensemble of New York, and a researcher of Digital Arts and Humanity Research Center at Pratt Institute. Ms. Yang has been invited to perform at notable institutions across the States, including Lincoln Center, the Barclays Center, the United Nations, Summer Stage, the New York Fashion Week among many others. She has served as a judge for the CCTV’s China Youth Talent Show Contests; the Fifth Annual American Youth Talent and Art Contests and China’s National Youth Music Competition. Feifei’s first self-composed and live Huqin music album, Dance of the Strings, was released in 2015. Her second album Vermillion Bird was released in 2016.

Pioneer Works is a center for research and experimentation in contemporary culture. Through a broad range of educational programs, performances, arts and science residencies, and exhibitions, Pioneer Works seeks to transcend traditional disciplinary boundaries, foster community, and provide a space where alternative modes of thought are supported and activated in tangible ways.