Bad Doberan is about 700 km away from where I live. Hamburg about 525 km.
(That almost sounds like a geometry task : get your compass and your ruler out, and see where I live…)

Anyway, ever since the people over at the St.Katharinenkirche in Hamburg started doing their pre-Zappanale concerts, I’ve been there. It’s the perfect stop in-between. You get a rest AND you get a concert. Bogus Pomp has already played there, and so did the Ensemble Ambrosius, just to name two.
Furthermore, the fellows of St.Katharine take their job quite seriously. They have released a number of these concerts on CD.

released in 2009 : Bogus Pomp at the St Katharina Church

released in 2011 : Ensemble Ambrosius at the St Katharina Church 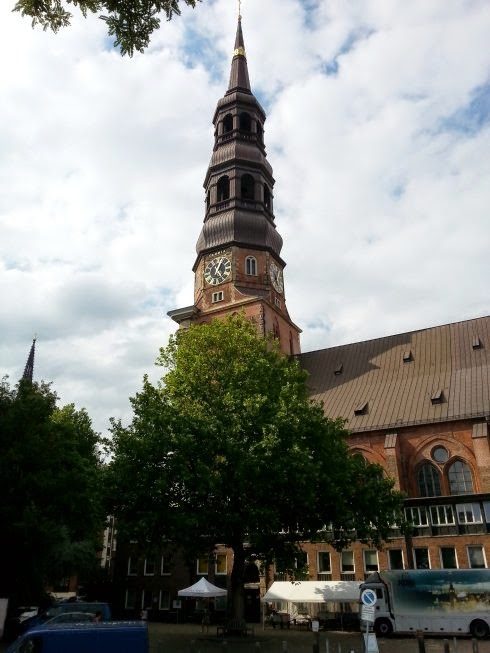 This particular Wednesday, the St.Katharinenkirche offered a double bill: the String Trash Project and The American-European Mothers Of Music. 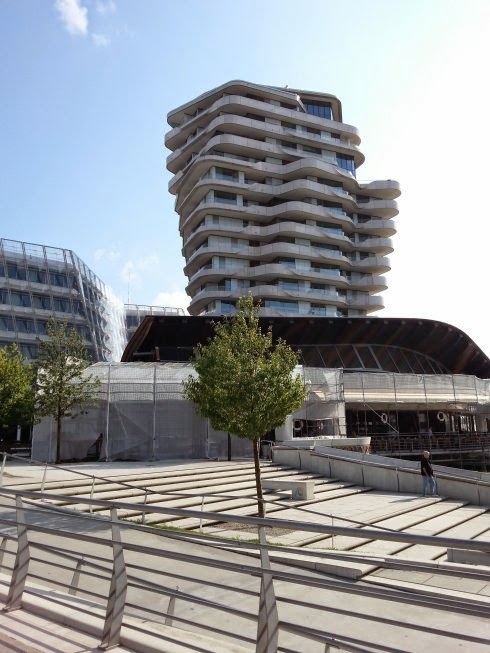 After the usual wrong turn and the classic traffic jams, I arrived at the church around 17:00 h.
The St.Katharinenkirche is very close to the new harbor. If you ever get the opportunity to visit it, you should. Old warehouses next to modern buildings. Beautiful. I try to take a walk there every time when I’m in the neighbourhood.

Heading back towards the church, I ran into Stephen Chillemi and Mary-Jane.Some call it coincidence, some call it karma, I call it a close encounter of the Zappa kind. A pleasant reunion.

The String Trash Project featured Peter Görs on guitar, Mick Zeuner on bass, and Siglinde Koch-Sembdner on harp. The sound of that harp was great. Siglinde sure knows how to play it. Unfortunately, the guitar and bass weren't up for the job.
A solo harp concert would have been great. Or maybe with a minimal accompaniment.
A missed opportunity.

Next up was the American-European Mothers Of Music ensemble, an occasional quartet that was put together by former Zappa sideman Napoleon Murphy Brock.
Next to Napoleon Murphy Brock on vocals, flute and saxophone, the band featured Mats Öberg on keyboards and chromatic harmonica, Benoît Moerlen (from French band Peach Noise) on marimba and Siglinde Koch-Sembdner on harp.
They played some Eric Satie, George Gershwin, J.S.Bach, and of course, some Zappa.
Napoleon looked sharp as always and he sounded good (but he did skip a few notes here and there).
Quite an impressive ensemble. Seeing Mats playing the chromatic harmonica with one hand and keyboard with the other, was quite unbelievable.
Favorite pieces were RDNZL and Chunga’s, the second one being mixed with a Wayne Shorter tune (in an arrangement of Ed Palermo). That made my day. I wanted more where that came from, but someone else had been in charge of the setlist…

Chatting with Hans Annellsson, I did learn that he will be re-recording his Swedish version of ‘Penis Dimension’. You might know that Frank Zappa once gave permission to Hans to record and to release a Swedish version of ‘Penis Dimension’.
Hans released it in 1993 on his “Tra La Larson” album.
This time, he will be doing another version with it with Mats Öberg on keyboard and with a female vocalist. It will again be in Swedish, but the lyrics will be re-written so that they can be sung from a woman’s point of view.
Looking forward to that!

Matthew Galagher was also in the audience. I remember corresponding with him some twenty-five years ago, and actually seeing him in Frankfurt at the Yellow Shark performance in the early ninetees... Matthew (who lives in the States) flew over to attend the very first edition of the Zappanale festival 25 years ago. He wrote an article about it in Society Pages magazine way back then.