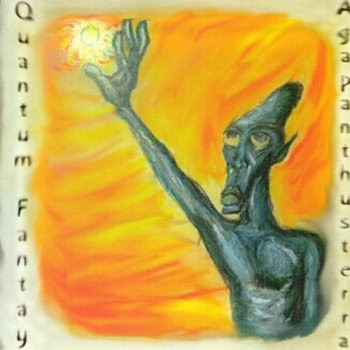 My pal Danny told me to check out Quantum Fantay. I did by ordering their first album (the 2007 re-release of their first album that is) and I liked it. Much to my surprise, when I was searching YouTube to hear some more, I noticed that they had performed at the Zappanale festival  in 2012.
I was there... How could I have missed that ?!?
The program booklet gave me a probable answer: they were the last band to play on the first day at the festival. On the same they that had Co de Kloet's interview with George Duke, and concerts by Gargantua, Triggerfinger, Just Another Band and the George Duke / Jean-Luc Ponty duo.
I probably caught a few songs, but somehow it hadn't been stored in my memory.
Too much is just too much.

Anyway, Quantum Fantay hail from Lokeren, Belgium. Actually, the band was supposed to be called "Quantum Fantasy", but do to a missing letter 's' they became Quantum Fantay.

The band has been making music since 2002. Spacerock, to be more exact. Psychedelic synthesizer soundscapes.
After their 2002 demo, the band released "Agapanthusterra" in 2005. Their most recent album, "Terragaia", is album number eight in their discography.

"Agapanthusterra" has every element that you expect from a progressive rock / spacerock band: imaginative and melodic instrumental soundscapes,