THE BLIMP - I NEED TO GO TO A HOSPITAL 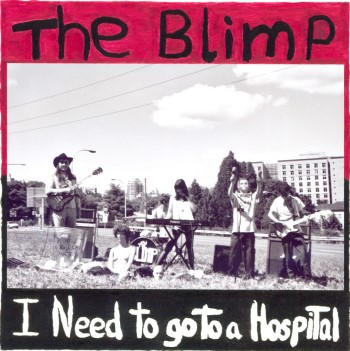 Lord, have mercy on the people from Eugene...

Good grief. This is one fabulous album.
Yesterday, I had listened to the band's 12" release (from 2010), so I thought I was prepared for "I Need To Go To A Hospital". Boy, was I wrong.
The one-sided "Not Beer" 12" made a fine impression (see yesterday's post), but this album is a gem.

I've said it before, and I'm happy to repeat it. Checking out bands that perform a composition by Don Van Vliet or by Frank Zappa, or that are influenced by these artists has pointed me in the direction of great discoveries. Lucas Gunn's The Blimp is such a discovery.
Yes, the band performs Don Van Vliet's 'The Blimp' and Frank Zappa's 'Lord Have Mercy' (the intro to Strictly Genteel), but the entire album is fantastic.
It starts with something played backwards with Mother-esque scream and shrieks on top of it and it just doesn't stop. Suberb !