As some of you might guess, I'm a fan of the music of Frank Zappa. Not just Zappa, but you know what I mean.
I'm also into comic books, comic strips, illustrations, graphic novels,... That's what you get when you grow up in Belgium.

So imagine my surprise when the team that organizes the Mosae Zappa festival added Dutch band De Schuldjongens to the line up of Mosae Zappa #5 by saying : 'De Schuldjongens, featuring vocalist Berend Vonk,...'.
For your information, Berend Vonk is an illustrator, painter and comic book artist that I have known and admired for over 25 years. I knew that Berend had an interest in music as I have an (amazing) album by De Sufgerukte Wallies ("Zebulon Zal Wonen In Het Licht") on which he sings lead vocals, but I didn't know that Berend was still performing...
Mosae would be the perfect opportunity to get my weekly dose of Zappa AND to see De Schuldjongens in concert.
Lotsa birds, one stone (or something like that). The 1991 album by De Sufgerukte Wallies.

At Mosae, De Schuldjongens were the third act of the evening. The trio featured LoveCavern (Berend Vonk) on vocals, Safari Safari on guitar, and Kapitein Knier on drums and they blew everyone away.

Pure energy. Punk dada. Or dada punk. With some Zappa quotes and a performance of 'Evelyn A Modified Dog' thrown in as icing on the cake. 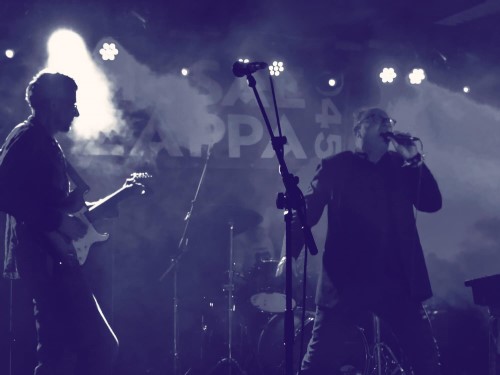 The band had brought along their new album : "Everything You Hate Is On The Run".

Here's two songs as a teaser :


In all, a top act.
And a perfect band for Mosae Zappa.