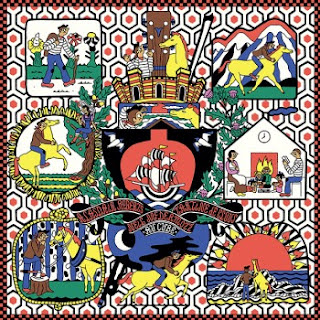 Alasdair Roberts has worked with Drag City Records for some 20 years, releasing more than ten records featuring both interpretations of traditional songs and his own songwriting. He has played with Will Oldham, Jason Molina and many others and is now part of The Furrow Collective. In addition to being a fine fiddler in the Scottish traditional style, Neil McDermott is currently researching the musical and political engagement of the 1960s Scottish folk scene with the anti-nuclear movement. Tartine de Clous (Geoffroy Dudouit, Thomas Georget and Guillaume Maupin) is a singing trio originally from the department of Charente in western France. Following in the footsteps of some of the great French groups of the late 20th century folk revival (such as Mélusine and La Bamboche), they sing largely unaccompanied three-part harmony arrangements of the traditional songs of France... and Scotland !

In early 2016 Alasdair Roberts spoke of his admiration for Tartine de Clous' first LP, "Sans Folklore" in an article in English folk magazine, fRoots. After a first musical encounter in Glasgow in January 2017, alongside local fiddler Neil McDermott, the five of them reunited in December 2017. They explored a common set of songs, French, Scottish and Roberts originals, and recorded them live, with an audience, at the Cube Microplex, an amazing Arts venue and progressive social wellbeing enterprise in central Bristol.

"Au Cube" presents 11 folk songs. In French and in English, seeking their origin in France and in Scotland, plus some original material.
The result is an extremely varied and very interesting album.

Out on the Okraina label and available as a double 10" set and on CD.
https://okrainarecords.com/