THE RUDY SCHWARTZ PROJECT - DON'T GET CHARRED... GET PUFFY! 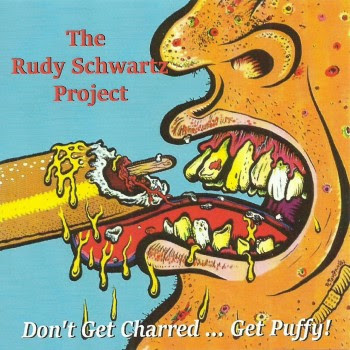 Released in 1992 on the Musical Tragedies record label (from Germany, remember them?).
Re-issued in 2012 with a different album cover on the DC-Jam record label as a CD and as a download.
And finally re-released a couple of weeks ago as a CDR by DC-Jam / Kunaki.

If you need one album by The Rudy Schwartz Project (and you do, believe me), this is it.

Not only does it include quite a lot of weird and catchy tunes, the album also presents one of the best coverversions of a Frank Zappa composition that I have ever heard.

Email ThisBlogThis!Share to TwitterShare to FacebookShare to Pinterest
Labels: others of invention, rudy schwartz project, zappa