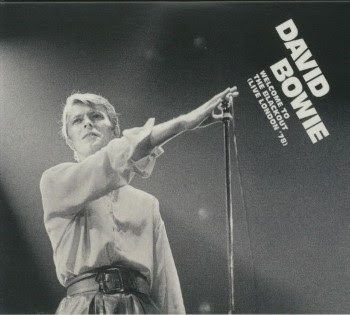 "Welcome To The Blacout (Live London '78)" captures Bowie in concert in June/July 1978.
The album was recorded live by Tony Visconti in 1978 and was produced by David Bowie.
The vinyl (3 LP) version got released at record store day earlier this year. The 2 CD version is even more recent.

The show included a lot of great songs, AND features Adrian Belew on lead guitar.
During the presentation of the band, David mentions the bands that the came from : "Sean Mayes from Fumble", "from Hawkwind, Simon House", "from Todd Rundgren's Utopia, Roger Powell", and "later Frank Zappa, Adrian Belew".
Great.

Just listened to 'Station To Station' again. With Adrian doing the train whistles and stuff. Wow !! An intro of four minutes !!

This is one great album.
Recommended.