THE ED PALERMO BIG BAND - ONE CHILD LEFT BEHIND 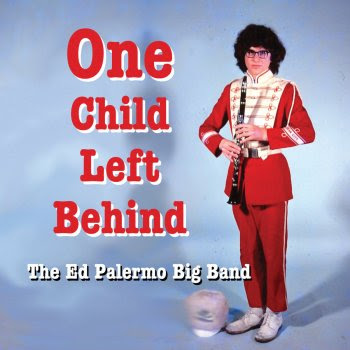 Ed Palermo did it again.
With "One Child Left Behind", The Ed Palermo Big Band delivered another extraordinary album.

On this brand-new album, the band performs some classic Zappa tunes, a few jazz standards (Moroder; Meober/Stoller) and a couple of Palermo originals.
The Zappa pieces sound superb. We're treated to astonishing arrangements and performances of 'Cleetus Awreetus Awrightus', 'Spider Of Destiny', 'Grand Wazoo', 'Fifty-Fifty', 'Pygmy Twylyte', 'Po-Jama People', 'Evelyn, A Modified Dog', 'Village Of The Sun'and 'Andy'.
A couple of these feature the inimitable Napoleon Murphy Brock who sounds as good as he ever did. Wow !!
Candy Zappa also guests on two songs, the first one being the Hidalgo / Perez penned 'Kiko And The Lavender Moon', and the second one her brother Frank's  'Evelyn, A Modified Dog'.

The mixture of Zappa compositions, jazz pieces and originals works fine. Ed Palermo's 'Dirty White Bucks', Vengeance' and 'The Goat Patrol' fit in perfectly.
My favourite tracks on the album are the jazzed up version of Neil Young's 'Harvest Moon' and the excellent 'Village Of The Sun' (sung by Jenna McSwain).

Email ThisBlogThis!Share to TwitterShare to FacebookShare to Pinterest
Labels: cuneiform, others of invention, zappa