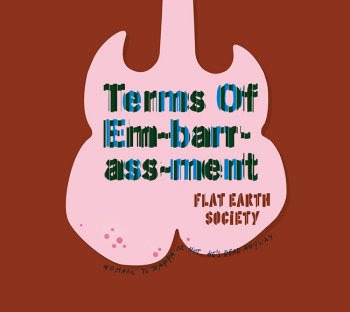 Flat Earth Society had prepared a special program for the occasion: "Terms Of Embarrassment". The concert included Zappa pieces next to compositions that had been written by Peter Vermeersch and by Pierre Vervloesem. And to add a bit of extra spice, FES had invited Mauro Pawlowski as a reinforcement.
The concert was quite good and, fortunately, the band got the possibility to take "Terms Of Embarrassment" on the road for a series of concerts in Belgium, The Netherlands and Japan.

The results of this tour can be found on this brand-new album. Recorded in concert in Ghent, Mechelen, Rotterdam, Sint-Niklaas and Breda, "Terms Of Embarrassment" presents 7 amazing pieces.
Add vocals by Mauro Pawlowski, the typical FES sound and arrangements, exceptional guitar solos by Pierre Vervloesem, one kg of humor per square meter, and you might be able to imagine what you could expect.
This is a must-hear !
Essential listening !!