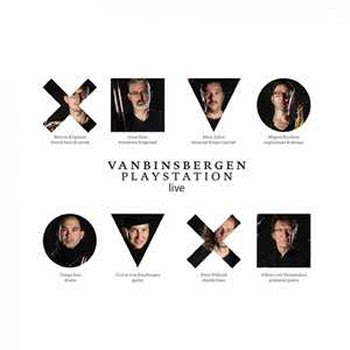 May 2015, the project got a sequel with a second concert in Den Bosch, NL, soon followed by a live album (recorded at the first two concerts).

"Live" is an excellent album. It presents 11 tracks, 9 of which were composed by Corrie van Binsbergen. Beautiful compositions / stories.
Check out 'The Magic Sock part 5' !!
The two other composers are Joost Buis with 'Basil Outside' (check out Joost Buis' Astronotes albums !!) and Billy Strayhorn with 'A Flower Is A Lovesomething'.

Van Binsbergen Playstation is doing concerts, just not that often. So check out http://corrievanbinsbergen.com/ and try to catch them live.
I saw them at the Paradox club in Tilburg, NL, recently and they rocked (or jazzed).

In the meantime, don't hesitate to get this amazing album.
http://www.challengerecords.com/artists/1444736467/
or
http://stichtingbrokken.nl/shop/