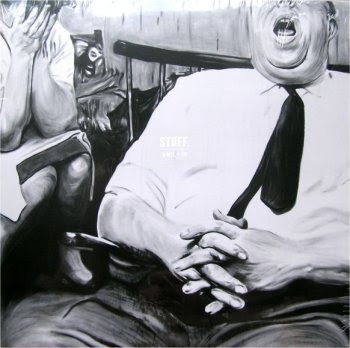 Belgian band Stuff stands for an experimental mix of rock and jazz.

Andrew Claes on digital saxophone, Joris Caluwaerts on keyboards, Dries Laheye on electric bass, Lander Gyselinck on drums, and Mixmonster Mennon on samples.
(Lander Gyselinck is also part of Sinister Sister, a jazz ensemble that performs the music of Frank Zappa.)
Stuff's eponymous debut album got released a couple of months ago.
A puzzle of rhythms, beats, samples and melodies.
Recommended listening.

I saw the band in concert, opening for Aka Moon at the Cirque Royal in Brussels a little while ago.
Quite an experience.
The vinyl album comes with a CD (that even has one extra track !).