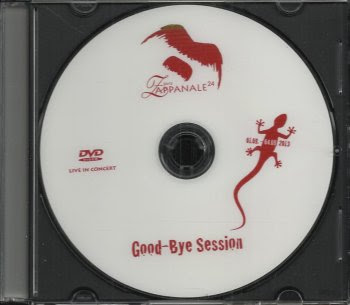 Each edition of the Zappanale festival ends with a so-called "Good-Bye" session. It's sort of a jam where members of various bands and ensembles join on stage to jam a bit.
It's always a good occasion to see some of the special guests and invitées on stage once more.

Last year, the session followed the Pojama People concert which meant that bass, drums and mallets of Pojama People (Kevin Crosby, Glenn Leonard and Ali Bach) were at first joined by the guitar player of Z3 (Tim Palmeri), and later on by Albert Wing, Mike Miller, Robert Martin and Tom Fowler.
And yes, they played some of their favourite Zappa tunes.

If my memory serves me right, this was the first time that a "Good-Bye" session got recorded on video and was made available on DVDR.