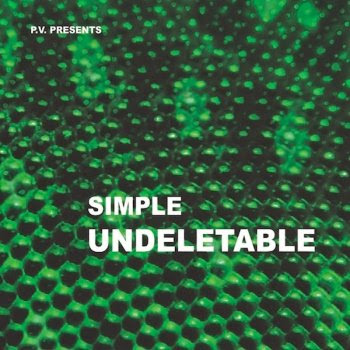 The last couple of years, the Brussels-based Off record label has released quite a number of fabulous albums that can be linked to producer, composer and guitar player Pierre Vervloesem. Next to Pierre's solo work, Off has released material by Kings Of Belgium (improvised / experimental rock trio), Les Boucles Absurdes (industrial beats), Codswallop (eighties pop with a dark edge), Caca (rock + saxophone quartet) and The Claude Zac Ensemble (RIO / prog), just to name a few.

Pierre Vervloesem's most recent project is called Simple and their latest album is called "Undeletable".

Pierre explains:
"The aim of Simple is simply to play music, my music. This is Simple."
And I'm happy to add that the result sounds excellent.

The album features Pierre Vervloesem on bass, Bruno Vansina on sax (Bruno Vansina Quartet, Flat Earth Society), Joris Caluwaerts on keyboards (Rudy Trouvé, Zita Swoon, Franco Saint De Bakker) and Didier Fontaine on drums (A Group, Flat Earth Society, Codswallop).
As you can see, there's quite a number of familiar names in the list of references which also means that it's not the first time that these musicians are playing together.

As for "Undeletable", the music is great. Simple and playful melodies slowly mutate into complex and multi-rhythmic pieces. The performances are excellent. These are top musicians.
Didier Fontaine displays some great drumming, emphasizing the melody lines and keeping everything fluent.
Both Joris Caluwaerts and Bruno Vansina sound very powerful, very energetic. Especially when they're playing in unison. Sometimes even in trio with the bass. And there's some great phrasing going on on the keyboard. For a moment, I even thought that I was listening to a (synth) guitar.
It's also very clear that Pierre is having a lot of fun on the bass. Beautiful lines and sounding really good in the mix.

"Undeletable" is a very fine album.
Rumour has it that it had to be re-recorded after a poor soul had erased the original recordings from the computer. There should be a severe penalty on deleting an album like this…

Some might call this experimental or avant rock. Othes might say that it’s a mix of progressive rock and jazz, but there’s only one label that sticks: this is “Pierre Vervloesem”.

This little gem is available as a download, but also as an old-fashioned CD !!
Check it out !!