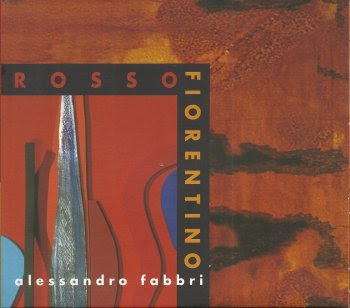 Italian jazz drummer and composer Alessandro Fabbri was part of the If Six Was Nine ensemble. They recorded a number of Frank Zappa compositions on their "Adante Allegro (Con Testo A Fronte) album in 1998.
In 2005, Alessandro Fabbri recorded and released another Frank Zappa composition. This time on his "Rosso Fiorentino" album. The disc had been on my search-list for quite a while. I stumbled upon it recently and I'm glad that I found it.
"Rosso Fiorentino" is an impressive jazz album, including some impressive original compositions ('Strange Blues'!!). It also presents an excellent version of Frank Zappa's 'Little Umbrellas'.
Double bass, soprano sax, violin, guitar, flute and drums.
Nice. Very nice.