NAPOLEON MURPHY BROCK - THIS IS WHAT FRANK ZAPPA HEARD 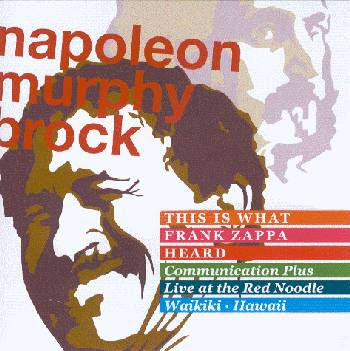 Everybody knows, or should know, that Frank Zappa discovered one of his top musicians at a concert in Hawaii. In 1973, Napoleon Murphy Brock was performing with Communication Plus at the 'Red Noodle' club in Hawaii. Zappa spotted him, was impressed, and asked him to join The Mothers.

Napoleon did join, and together with George Duke, Ruth Underwood, Chester Thompson, Tom and Bruce Fowler, Zappa made some of his finest albums.


40 years later, Napoleon is giving us a glimpse of what Communication Plus was all about. We get to hear what Zappa was so impressed about. Sure, we all know about NMB's musicianship and his stage presence, but listening to this album does have a couple of nice surprises.

This is funk. Pure funk. Party music. Not the best audio quality, but that's OK. This is a historical document.