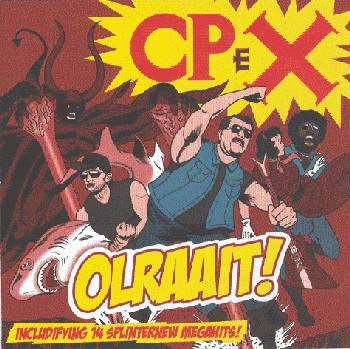 CPeX, or the Clement Peerens Explosition is a belgian pastiche rock band.
Clement Peerens was a character (performed by Hugo Matthysen) on Flemisch radio show "Het Leugenpaleis". Each week, Clement gave his opinion (in a Flemish (Antwerp) dialect) on various topisc of the pop and rock music scene.

With CPeX, Hugo Matthysen (as Clement Peerens), Aram van Ballaert (as Dave de Peuter) and Ronny Mosuse (as Sylvain Aertbeliën) bring an hilarious parody. Familiar sounding riffs and melodies (AC/DC, The Beatles, Hendrix, ...) are combined with lyrics about the most silly subjects (including a lot of macho blah blah), all sung in an Antwerp dialect.

You have to understand Dutch to fully appreciate it. Fun.