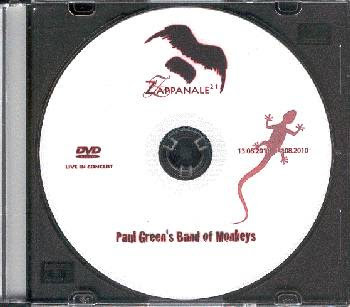 Due to the large number of concerts that I wanted to see, I had to skip a few.
Too much is just too much.
I had heard that Paul Green's Band Of Monkeys would perform some sort of best of seventies psychedelica show, so I just thought I'd better skip that.

As the concert was also released on DVDR at the festival, I thought I'd have a look later. At home.

On the DVDR, Paul Green's Band Of Monkeys isn't convincing. It's all a bit sloppy. Paul Green himself guests on guitar, and does a good job, but by himself, he can't lift the overall quality.
A bit disapointing. A pity.

Setlist of this show (and of the 2009 show) were provided by Steffen Schindler. (Thank you !!) They have been added to the United Mutations Archives.