Thurssay afternoon had kicked off with a short visit to the expo, housed next to the Arf Office, in the center of Bad Doberan.
This year's expo focussed on The Zappa Power Trio (Warren Cuccurullo, Terry Bozzio, Patrick O'Hearn), a painting exhibit (by artist Olaf Rösler), and a picture exhibit (by photographer Bill Gubbins). 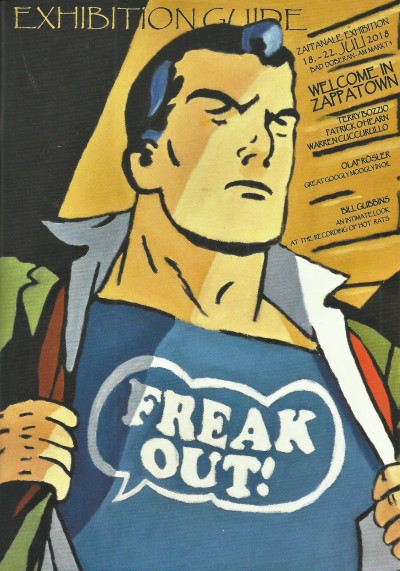 The above picture shows the cover of the exhibition guide, taken from a painting by Olaf Rösler.

The Zappa Power Trio part of the expo showed lots of records. Not just the albums that they made with Frank Zappa, but also lots (LOTS !!) of other albums that Warren, Terry and/or Patrick appeared on. And not just some Missing Persons stuff. Very impressive. Plus some pictures, lists of their discographies, The DW Black Page Zappa Snare Drum, an 18+ section that showed Warren on video, and more.

The second part of the exhibit showed various paintings by Olaf Rösler. I liked the Superman/Freak Out one (pictured on the cover of the exhibition guide), but his other works didn't impress me that much.

Part three of the expo, however, was something I hadn't expected.
Photographer Bill Gubbins had been present during Frank Zappa's Hot Rats sessions. The expo gave a sneak preview of Bill's exclusive photos that will be part of a planned book celebrating the 50th anniversary of "Hot Rats".
Reprints of some of the pictures were made available in different formats but in a very limited run.
My favorite one was taken at the August 10, 1969 concert at Warrensville Heights, showing Don, Jimmy, Art, Roy, Motorhead, Bunk, Ian, Buzz and FZ. Do I need to tell you that I bought a copy?