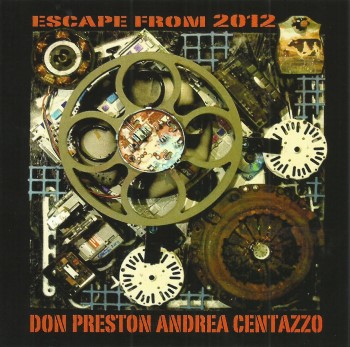 February 2010, Don Preston and Andrea Centazzo did a concert at the South Pasadena Conservatory of Music. About one year later, Don released a recording of this concert on CDR on his Brain Records label. I only recently found out that the actual recording (mixed, edited and produced by Andrea) was released on (a factory pressed) CD as well, on Andrea's Ictus Records record label.

The album presents 9 improvised compositions / tracks and clocks at a bit over 60 minutes.
(The Brain Records version only had 8 tracks and a total time of 56.20 min...)

Andrea plays gongs, cymbals, drums and the mallet kat;
Don is not only featured on keyboards and electronics, but he also plays the double bass !!
Fascinating.