IKE WILLIS AND ZAPPATIKA TO TOUR THE UK IN NOVEMBER 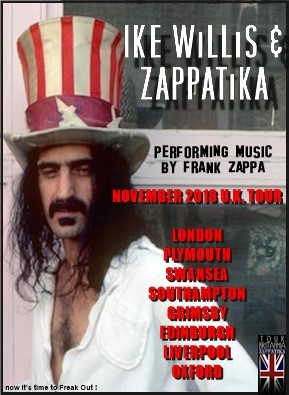 Ike Willis and Zappatika will be touring the UK in November.
From November 9 to 18.
The following cities have been confirmed : London, Swansea, Plymouth, Southampton, Grimsby, Edinburgh, Liverpool and Oxford.

Zap McInnes adds : "We might also follow this UK Tour with 2 "one night only" shows in The Netherlands (probably Breda) and then Germany (somewhere near Hamburg) if negotiation is completed in time (TBC)."