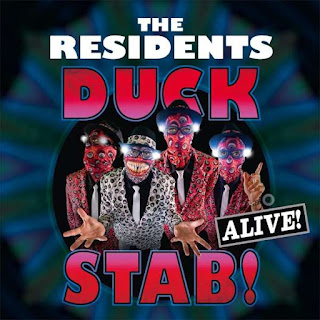 The Residents released DUCK STAB! as a seven inch, 33 1/3 rpm EP in 1978. For the group, the relatively lighthearted EP represented a break from the much more experimental Eskimo recordings which consumed the majority of a four-year period from 1975-79; for Ralph Records it was a much-needed revenue source at a time when the band was not producing much product. To everyone’s surprise, the EP was a hit, selling 50,000 copies in a few months. The demand was so high that Ralph insisted the band record a second EP, Buster & Glen, which they paired with DUCK STAB! to make an LP, which was also quite successful.

Several years later, Night Flight, a program featuring alternative programming on the USA cable channel, aired Residents’ video, including the Hello Skinny music video based on a song from the DUCK STAB! / Buster & Glen album. The program aired from 1981-88 often highlighting The Residents to the extent that many of the group’s fans cited Night Flight as their initial introduction to the band.

Fast forwarding to 2016 when Night Flight resurrected itself as a streaming video service, Night Flight Plus. In recognition of their long-standing connection, Night Flight invited The Residents to create a program in celebration of the service’s 40th Anniversary on June 5, 2021. Since the band was already rehearsing DUCK STAB! as part of their upcoming 50th Anniversary Tour, the forty-year-old EP/LP seemed like a perfect choice for Night Flight.

With a professional camera crew, led by director John Sanborn and director of photography Frazer Bradshaw, The Residents performed the reworked DUCK STAB! ALIVE! music over three days from May 19-21,2021 at the 25th Street Studio in Oakland, CA. The results, as you can hear and see on the discs of this limited boxed set, are spectacular.