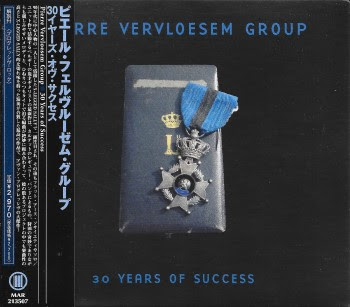 Keeping track of Pierre Vervloesem's musical output isn't always the easiest task.
However, it is worth the effort as Pierre has released another gem.

"30 Years Of Success" got released in Japan by the Belle Antique record label. Fortunately, it's also being distributed both in Yurip and in the US.
The album features Pierre on guitar, Bruno Vansina on sax and synth, Nicolas Dechêne on bass and Renaud Van Hooland on drums.

There's a couple of new tunes (at least to my ears) but also quite a number of older pieces performed by this new line-up on this excellent album.
Surprising melodies, energetic, coherent, twisted rhythms... Right up my alley.
I like it. I really like it.