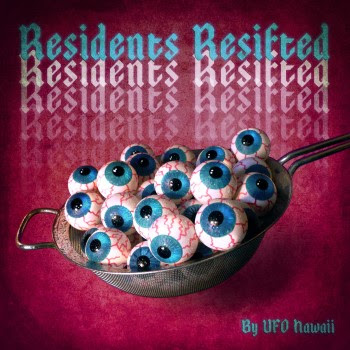 Künstler Treu, also known as UFO Hawaii, has his version of The Residents' 'Simolina' up on Bandcamp. It's little teaser for an EP that he made available on iTunes.

Pop versions of Residents tunes. Check it out :


Work on this album started a good while ago when I received an invitation to join Der Plan for a Residents tribute festival in the Netherlands. After we met up with Hardy Fox, who was touring Berlin at the time, Moritz® picked two hands full of what he considered essential Residents songs, and I began working on some of them in preparation for the live show.

Unfortunately the festival was canceled due to financial problems soon thereafter, and half a dozen songs in progress ended up vanishing into the drawer.

But only until just recently, when I then rediscovered them, and - after having a fresh listen - found them quite worthy of being given some finishing touches.
Also, Mr. JJ Jones was kind - and interested - enough to join in, contributing his versatile singing abilities to the songs.

So here you go… These are the five cover versions that came out of our combined efforts.

Have fun listening, and keep watching the skies.