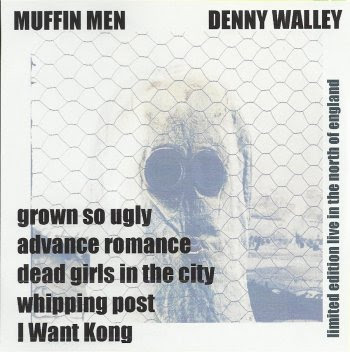 Those lads from Liverpool, you know, those guys who named their band after something that you can eat.
What are they called? The Biscuit Boys,... The Cupcake Quartet,...
Oh yes, The Muffin Men !

Well, these Muffin Men recently performed at the Moo-Ah Festival with special guest Denny Walley.
Those very same Muffin Men are kicking off their tour tonight, and they're bringing Denny Walley along.
To celebrate all this, the band released this 5-track CD called "Limited Edition - Live In The North Of England". Five tracks of Muffin Men with Denny Walley.

"Live In The North Of England" will show you what The Muffin Men are all about.
Here's a band that does a sensational job performing the music of Frank Zappa (and of Captain Beefheart) and this little album proofs it.
'Dead Girls In The City' is just great. It's a mix of 'Dead Girls Of London', 'City Of Tiny Lites' and 'Tryin' To Grow A Chin', with Jumpy and Denny playing some fabulous guitar lines.
I love it.
And 'I Want Kong' is even better. The perfect mash-up of a Beatles and a Zappa tune.

Total time about 35 minutes.
Best spent half hour of the day.

This little gem is only available at the concerts, so you know where you have to be !


The Muffin Men have played nearly 2000 dates around Europe, often featuring ex-Zappa alumni. The band play their own arrangements of Zappa material, along with some note-for-note versions of some favourites.

At least 12 ex-Zappa musicians have performed with The Muffin Men along the years. Once again the band are joined by Denny Walley, ex Zappa guitarist notable for his work on the “Bongo Fury” and “Joe’s Garage” albums” Denny was also a member of Captain Beefhearts’s Magic Band, appearing on the classic “Bat Chain Puller” original album. He has previously played with the band many times adding his original slide guitar style and soulful vocal, expect renditions of Joe’s Garage favourites such as “Crew Slut” and even a bunch Beefheart pieces.

Email ThisBlogThis!Share to TwitterShare to FacebookShare to Pinterest
Labels: denny walley, others of invention, zappa