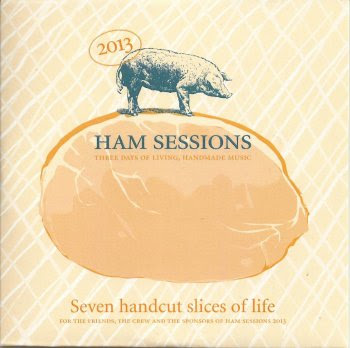 A couple of weeks ago, we went to the Ham Sessions festival in Ghent (BE). An afternoon festival with three bands. First band on stage was Sinister Sister (performing the music of Frank Zappa), and the evening closed with a concert by the Flat Earth Society (with their Zappa tribute).
I guess that I don't have to explain that this was amazing. And it all took place in Michel Mast's back-yard. Literally speaking.
This was day one. There'll be another afternoon in September...

These Ham Sessions have been going on for quite a couple of years and since 2013 a sampler with recordings of the festival is being produced.
"Ham Sessions 2013" presents live recordings of all the bands that participated : Black Flower, W.O.F.O., Nordmann, Synaesthetic Trip, Talking Cows, Sweet Defeat and Shakara United.