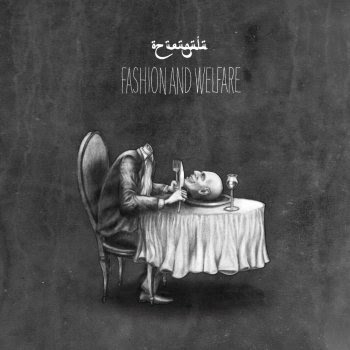 August 2014, Öz Ürügülü performed at the Zapperlot festival in Switzerland. It was my first encounter with the band. Glad that I was there.
Öz Ürügülü did a great job, played a fine concert. I remember buying their first album, "Forgotten Archives" (released in 2012), and enjoying it a lot.

We're a couple of years later now, and Öz Ürügülü has just released their second album.
"Fashion And Welfare".
To sum it up in a couple of words, this is a great album. It hit my mailbox the day before yesterday and I've been playing it (almost) non-stop since then.
Odd meters, crazy rhythms, progressive rock, melodic guitar lines, eastern influences and a rather particular instrumentation (including sitar and kaz).

All the compositions have these funny names like 'Android Moustache', 'Odd Waltz' or 'I Am The Fungus'. I love it.
With this music, when I close my eyes, I see bearded, long-haired men dancing with beautiful women. Like a scene drawn by Hugo Pratt, straight out of Corto Maltese. Fabulous.
This is great.
Did I tell you that I love it?

You need to hear this.
http://www.oezuerueguelue.ch/

Here's Karl King in an attempt to promote the album. Buy it from his shop !!
http://shop.carlkingdom.com/


And here's 'Odd Waltz'. Live. A studio recording of the song can be found on "Fashion And Welfare".