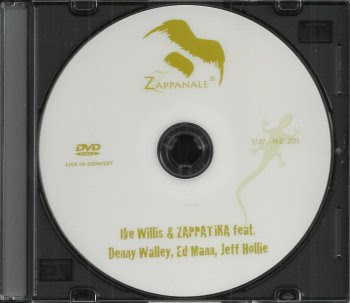 July 18, 2015, Ike Willis and Zappatika took the stage at the Zappanale festival in Bad Doberan, Germnay. The band had promised to bring Zappa's "Joe's Garage" back to life and had brought along Denny Walley, Ed Mann, Craig 'Twister' Steward and Jeff Hollie for the occasion.
Ike started the gig by telling the audience that they kick off with a couple of his original songs. An excellent idea as I really like Ike's solo albums.
Unfortunately, Ike's voice wasn't up for the job. Traveling, fatigue, who knows, but it was very unfortunate indeed... Great playing, but I lacked the power in Ike's voice.

The concert was made available on DVDR at the festival.