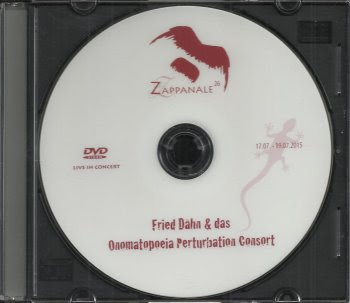 July18, 2015, Fried Dähn did another concert at the Zappanale festival. This time, he had brought along a band that he called Das Onomatopoeia Perturbation Consort.
I had expected a lot from this concert but it didn't really meet my expectations.
The band used Zappa's lyrics, translated into German, put on compositions by Fried Dähn (?).
Apparently very funny for the German part of the audience, but musically rather weak.
They did perform two Zappa compositions: 'Twenty Small Cigars' and 'King Kong'.

The concert got recorded and was released on DVDR in a very limited edition at the festival.

Email ThisBlogThis!Share to TwitterShare to FacebookShare to Pinterest
Labels: others of invention, zappanale