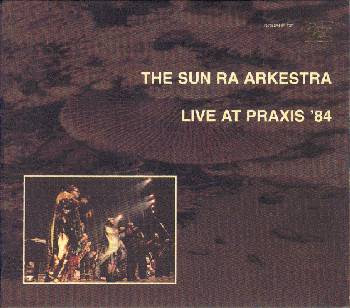 February 27, 1984, the Sun Ra Arkestra performed at the 'Orpheus Theatre' in Athens, Greece. One year later, the first part of the concert, "Live At Praxis '84 Vol.I", was published on Kostas Yiannoulopoulos' Praxis label. Volumes II and III came out the subsequent years on the same Greek label.
In 2000, however, the complete recording found its way to a 2CD set on the Leo Records label.

Besides the fabulous Sun Ra themes, there's quite a lot of beautiful standards on this set as well: 'Mack The Knife', 'Cocktails For Two', '(Somewhere) Over The Rainbow', 'Days Of Wine And Roses', ...

Data & pictures have been added to the United Mutations Archives.