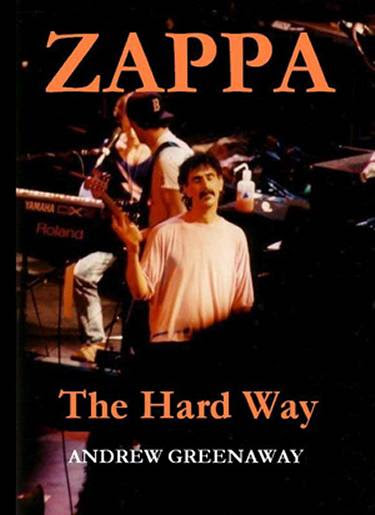 The tour kicked off in February 1988 in New York City and continued on the U.S. East Coast until the end of March. From April on, the twelve-piece band performed in Europe. The band started in France and played some forty-plus dates all over the old continent.

Somewhere during these concerts a couple of the bandmembers were having troubles with clonemeister Scott Thunes. (clonemeister = the one who is in charge of the rehearsals)
Eventually, this got so bad that Zappa decided to stop the tour after the last date in Europe. He cancelled three months of concerts on the U.S. West Coast, hence naming one of the albums that he released with 1988 material, "The Best Band You Never Heard".

For "Zappa The Hard Way", Andrew Greenaway interviewed almost everyone who was in Zappa's 1988 band. Everyone tells the story like he remembers it. This makes "Zappa The Hard Way" an extraordinary book. Not only does it give a behind-the-scenes look of what happened during the tour, it also gives you an idea of how Zappa and the various bandmembers must have felt. Plus, it lets you follow the musical development that happened during the concerts: the new pieces that got introduced, the arrangements that changed, the secret words, ...

Zappa knew that touring makes you crazy. He had been caught in his own "200 Motels" and there was nothing he could do about it. FZ was touring with what he considered the best band he ever had, and he had to quit.

In "Zappa The Hard Way", Andrew does not look for answers. He does not point the finger at anyone. He just tells the story of a fabulous tour, spiced with interview fragments.

This, my friends, is essential reading.
Do I need to tell you that it includes the complete 1988 touring schedule & setlist for every show?

Andrew says:
"Why not pop along to our 'Barfly The Zappa Way' soiree at Camden's Barfly club, where author Andrew Greenaway and editor of the UK's leading Zappa website www.idiotbastard.com will be
promoting his recently published book 'Zappa The Hard Way' that documents the last fateful tour that Zappa undertook in 1988. "
Geplaatst door UniMuta op 5:25 AM